Populate the side area with widgets, images, navigation links and whatever else comes to your mind.
18 Northumberland Avenue, London, UK (+44) 871.075.0336 [email protected] 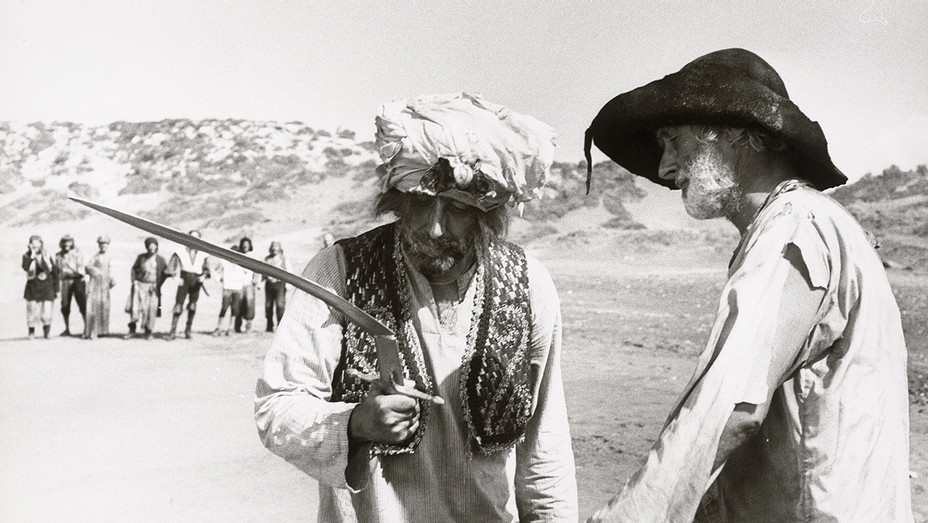 The ghost of Peter Sellers

The Ghost of Peter Sellers is a 2018 feature length documentary film, directed by Peter Medak and produced by Paul Iacovou. A cautionary tale about filmmaking, it tells the tale of Medak’s ill-fated Hollywood 17th Century pirate comedy, shot in Cyprus starring Peter Sellers and Spike Milligan in 1973. The documentary is about the making of that film and what happened behind the scenes, which was more outrageous and funnier than the actual movie itself.

Back in 1973, Peter Medak was a hot director on the rise, when his friend Peter Sellers asked him to direct his next film, “Ghost in The Noonday Sun”, which was set to be filmed on the island of Cyprus. Somehow the idea of filming a 17th-century pirate comedy aboard real ships on the Mediterranean seemed a good idea at the time.

The original ‘Ghost’ movie was shot mostly on the Mediterranean sea on real ships which nobody had ever dared to attempt before. The stories surrounding the star-studded production are legendary. Even before shooting began, the Greek Captain delivering the Pirate ship to Kyrenia’s magnificent 7th Century Harbour was so drunk, that he crashed the ship into the Quay. The stormy weather and rough seas made the cast and crew seasick. It was not long before Peter Sellers lost confidence in the film and tried to sabotage it and on days when he was not actually sea sick, he would pretend to be sick, only later to be seen water-skiing. Reeling from a breakup with Liza Minnelli, the already mercurial Sellers made unusual demands and even faked a heart attack so he could run off to London to have tea with Princess Margaret. The production descended further after Sellers started first firing the producers and cameramen, before turning on his friend (and the film’s young director), Peter Medak, trying to stage a mutiny against him. Not surprisingly, the film fell behind schedule. Sellers’ temperamental outbursts and bizarre behavior ultimately derailed the $2 million production.

Structured around the original director Peter Medak and his journey back to the island 42 years later, The Ghost of Peter Sellers is a timeline of events that turned the 1973 movie into a notorious disaster. From Los Angeles to New York, from London to Cyprus, Peter recaptures what it was like to work with the genius talents of Sellers and Milligan whilst explaining the saga of the Pirate film and how such a brilliant and funny idea could go so terribly wrong and become a total disaster.

When something goes wrong in a movie — and a lot went wrong — the director gets all the blame. So I was blamed for it, and I blamed myself for it for 43 years - Peter Medak

Learn more about the team came together to create this amazing documentary by the film’s producer Paul Iacovou, one of the people the Startuportal proudly supports. Find his TEDx talk here.

This text is part for an article by Paula Bernstein, published on Filmmaker Magazine on Mar 21, 2016. Read the original article here.

The definition of extraordinary

This website uses cookies to improve your experience while you navigate through the website. Out of these, the cookies that are categorized as necessary are stored on your browser as they are essential for the working of basic functionalities of the website. We also use third-party cookies that help us analyze and understand how you use this website. These cookies will be stored in your browser only with your consent. You also have the option to opt-out of these cookies. But opting out of some of these cookies may affect your browsing experience.
Necessary Always Enabled
Necessary cookies are absolutely essential for the website to function properly. This category only includes cookies that ensures basic functionalities and security features of the website. These cookies do not store any personal information.
Non-necessary
Any cookies that may not be particularly necessary for the website to function and is used specifically to collect user personal data via analytics, ads, other embedded contents are termed as non-necessary cookies. It is mandatory to procure user consent prior to running these cookies on your website.
SAVE & ACCEPT